In New Zealand Cyber Monday is one of the biggest shopping events of the year. It always falls on the Monday after Black Friday and this year it occurs on the 30th of November.

Up to 40% Off with Newsletter Signup

Subscribe to the Puma newsletter and receive info about regular and special...

Save up to 50% in the outlet section at Puma! The deals will be even better...

Up to 20% eBay Coupon Codes

Score up to 20% off on your purchase! Various eBay promo codes are available -...

Up to 70% Cyber Monday Deals

Check the landing page regularly and snatch the most attractive deals on eBay!...

Sale Products Up to 50% Off

Looking for awesome bargains for Black Friday and Cyber Monday? Visit the sale...

Up to 50% Off Nike Cyber Monday

If you search enough, you will surely find the most stunning Cyber Monday promos...

ASOS Cyber Monday Up to 70% Off

Don't miss out on any of the brain-melting deals at ASOS during Black Friday and...

If you want to make sure that none of the biggest Cyber Monday markdowns is... 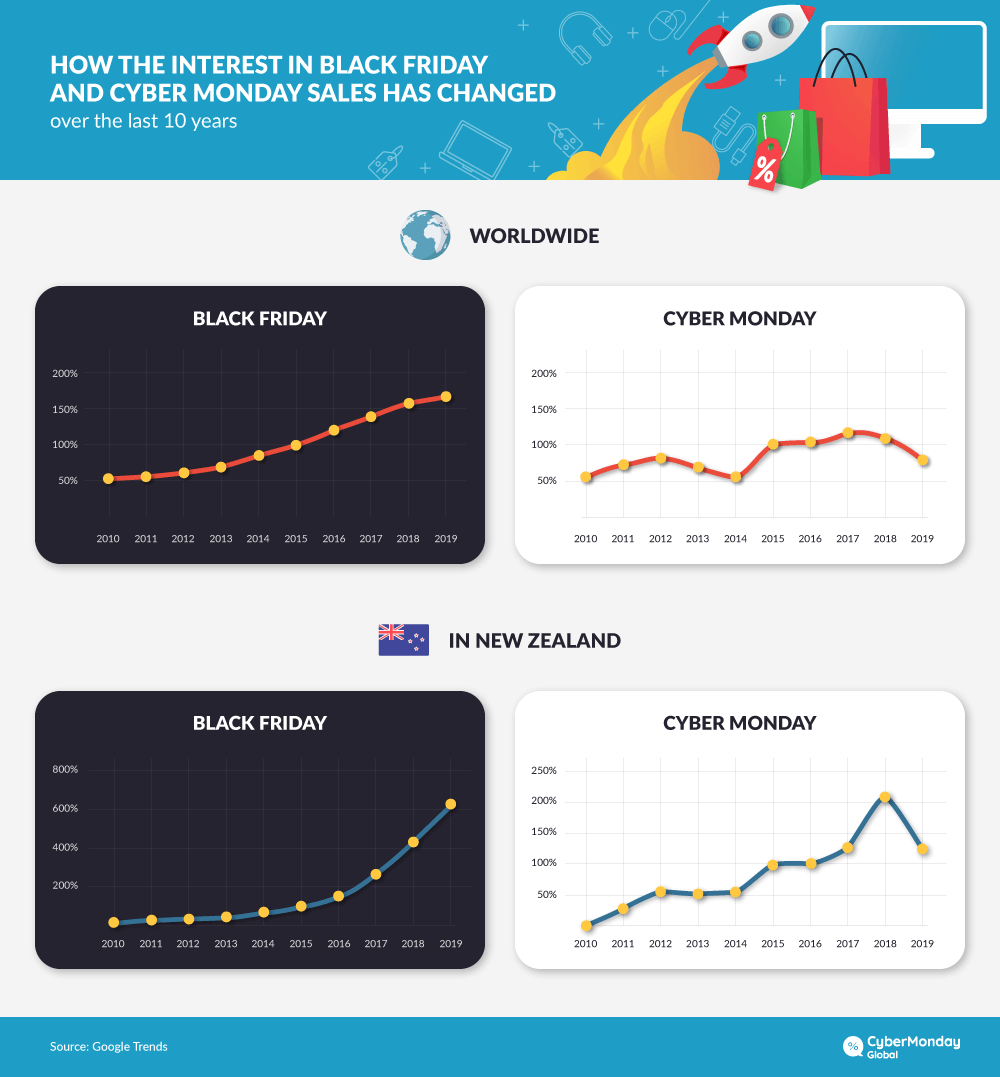 With a help of Google Trends, we verified the popularity of Black Friday and Cyber Monday sales in time, both globally and in New Zealand.

Data for New Zealand shows that the peak of interest in both Black Friday and Cyber Monday fell on 2018. Although 2019 was not the best year in terms of Internet users’ activity, both events still receive New Zealanders’ attention. Unfortunately, the pandemic and unstable situation in the labour market and the economy may cool off the interest of some shoppers. 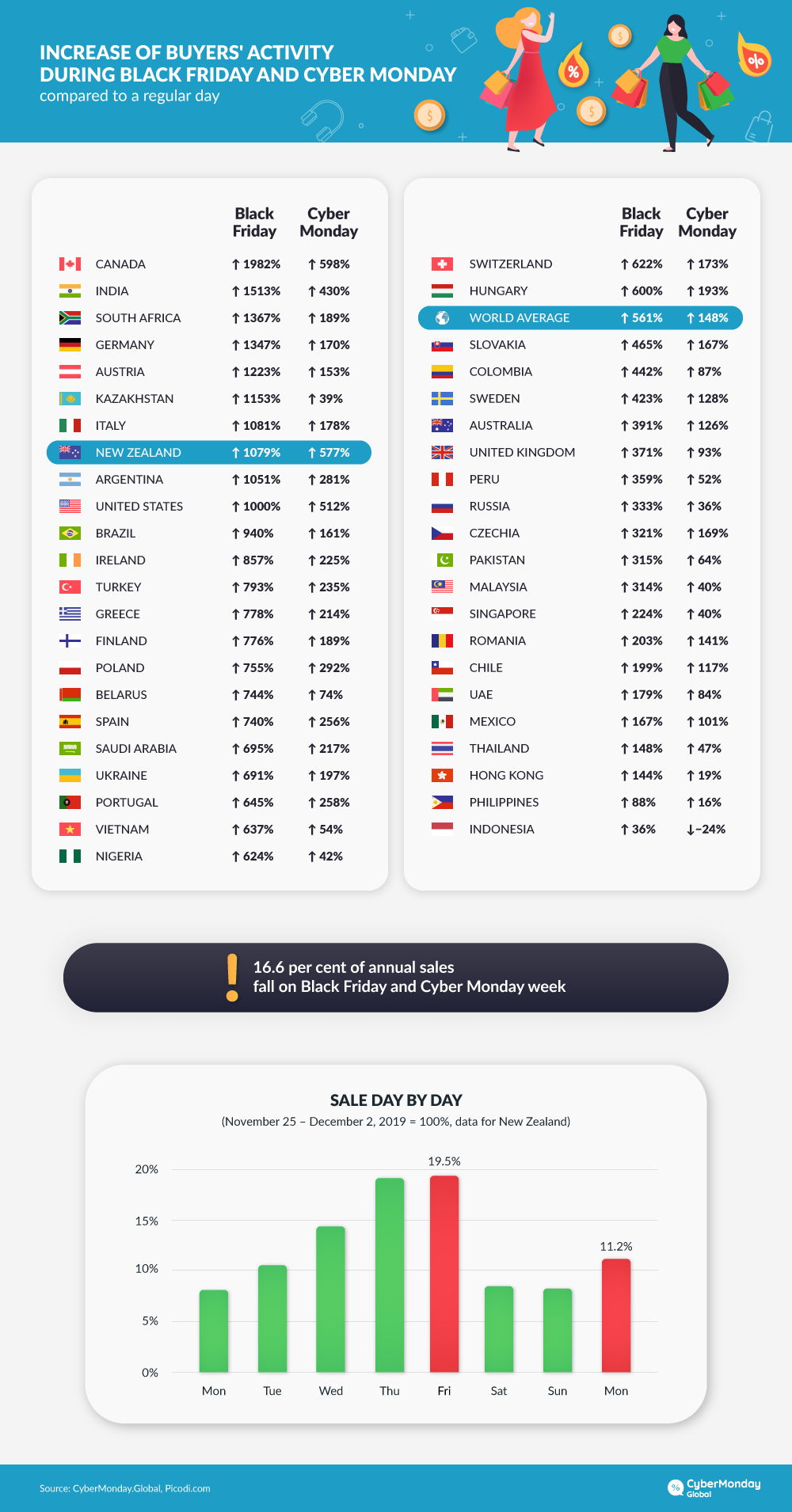 Keeping in mind that sometimes Black Friday sales start as early as Monday, we checked how the sale looked day by day. The biggest activity was, obviously, noted on Friday — 19.5 per cent of the transactions made between November 25 and December 2 fell on this day. The Monday prior to Black Friday had the least number of purchases during the analysed period. In total, 16.6 per cent of all annual sales took place during the 8 days of sales.

We asked 19 thousand Internet users in several dozens of countries about their opinion on November sales. 49 per cent of New Zealanders who took part in any of the analysed events were satisfied. 41 per cent of consumers were rather satisfied. The proportion of unsatisfied consumers in New Zealand is quite low (9 per cent rather unsatisfied and 1 per cent unsatisfied). Hungarians, Argentinians, and South Africans were even more discontent about Black Friday and Cyber Monday. 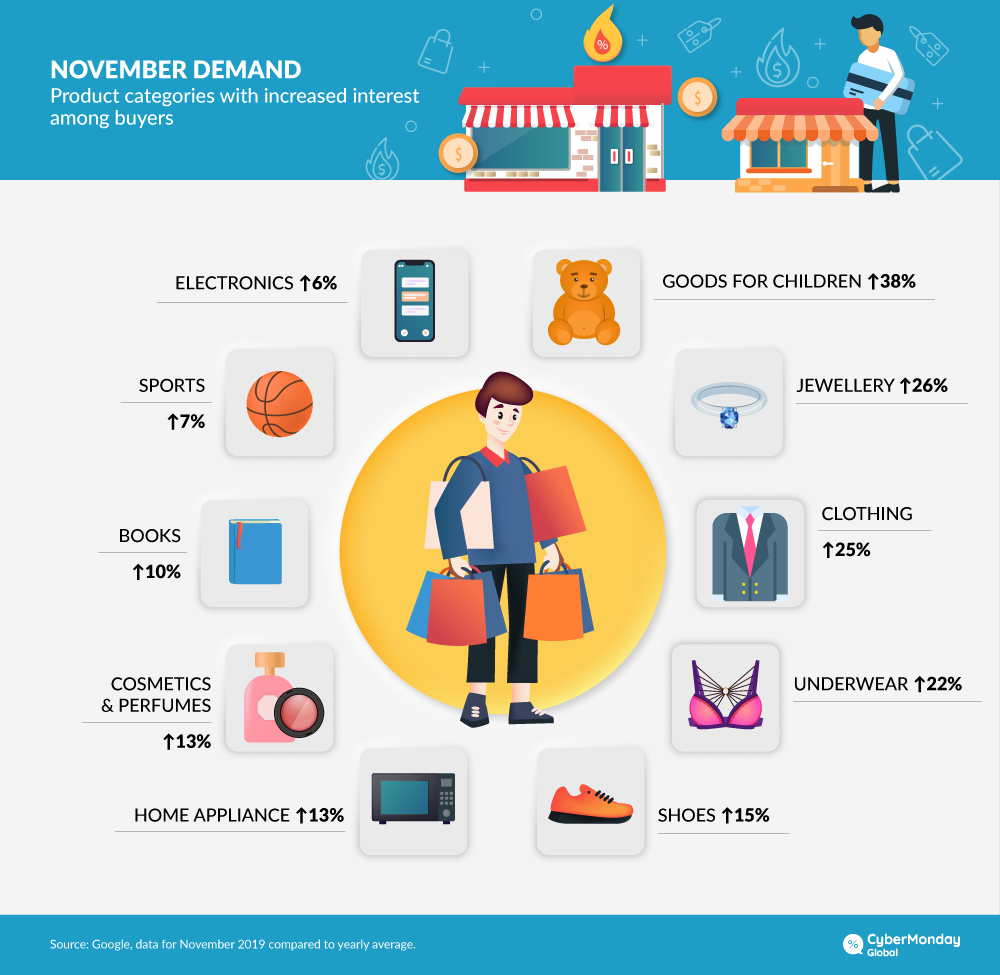 Statistics on Google search queries can tell a lot about New Zealand consumers. Black Friday and Cyber Monday are usually associated with sales on electronics. However, in New Zealand, it is child care articles that are extremely popular. During November sales, the demand for this category increased the most — 38 per cent compared to the annual average. A similar trend was observed in countries such as Australia, Spain, Finland, Mexico, or Portugal.

The second category which increased the most in terms of popularity was jewellery (38 per cent increase), while clothing ranked third (25 per cent). 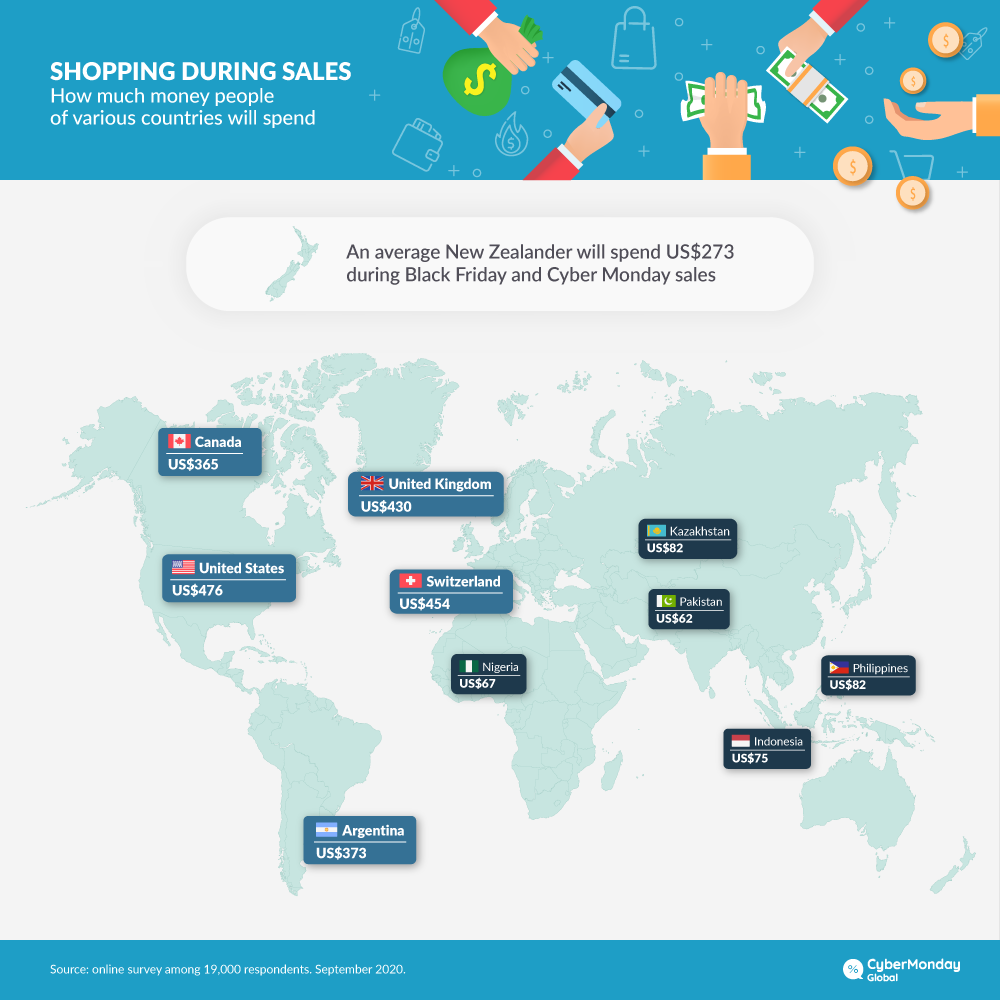 The survey conducted among citizens od 44 countries shows that New Zealanders are rather big spenders: we will spend NZ$415 on average (around US$273). People from Australia and Finland will spend a similar amount — US$286 and US$262 respectively.

All statistical data comes from Google Trends, Google Keyword Planner, and Picodi.com, a global discount platform operating since 2010, which created CyberMonday.Global, a site dedicated to Cyber Monday sales. The survey conducted in September 2020 among 19 thousand respondents from 44 countries were also used in the report. For currency conversion, we used the average exchange rate from Google Finance.